The crew teleporter is also used in several blue options.

The Zoltan shield augmentation blocks teleportation, unless a ship has the Zoltan Shield Bypass augmentation.

Teleporting can be broken into two different steps, boarding and retrieving

To teleport your crew members to the enemy ship you must click on the room that you want them teleported to, using the top button on the teleporter control.

When teleporting to an enemy ship you are limited to moving between two and four crew at a same time, depending on if you have a two or four person teleporter. When teleporting more crew than a room can hold the additional crew will be placed in adjacent rooms.

For more information on using the crew teleporter for boarding see the Boarding page.

To retrieve crew from an enemy ship you must click on a room with you crew in it using the bottom button on the teleporter control.

When retrieving crew from a enemy ship you can teleport up to four at a time, even with two person teleporter, provided they are in the same room. You can teleport four people from a two person room by walking your additional crew though a room at the moment of teleportation. Retrieved crew that cannot fit in the teleporter room will be placed in adjacent rooms.

The teleporter ionizes itself to produce a cooldown between uses. This cooldown takes between 20 and 10 seconds, depending on level of upgrade. When your ship is not in danger, the cooldown will be instant.

If your teleporter is damaged and all of your crew is aboard another ship, then you take a shuttle from the enemy ship to yours:

"With your teleporter damaged and no way to fix it, you take one of the enemy ship's shuttles to return to your own ship."

In most cases, killing all the enemy crew yields better rewards than destroying the ship (by depleting its hull points through damage). An especially rewarding event to have the teleporter is the Friendly Slaver-event, which makes it possible to gain up to 2 crew members in one event.

Take care when boarding with cloak, as a cloaked ship cannot be teleported out. The general strategy with Teleporter is quite different, depending on whether you possess Medbay or Clonebay. Clonebay brings less risks of losing the boarding crew compared to Medbay.

If using the Federation Cruiser, don't forget to turn off the Artillery Beam to avoid destroying the enemy ship and killing your own crew.

In the Easy & Normal boss fights, a teleport powered with 2 energy is (usually) the optimum to teleport two crew to one of the gun rooms, and take out both the single enemy crew and the gun, as teleport will be recharged in time to bring them home once they take out the gun. Increasing the power to 3 energy for the return teleport means your teleport will recharge faster for the next teleport to a gun room.

A good augment to use with the crew teleporter is Reconstructive Teleport, which completely heals teleported crew.

Automated ships may be teleported to, but the lack of oxygen kills non-Lanius crew members quickly. At least level 2 Teleporter is needed to be able to teleport most races out just before death. Automated ships have 2 capacity rooms and so simultaneously teleporting over more than 2 crew will split them between rooms - this will require 2 teleport cycles to bring them back (however if there are doors then can be done in one teleport cycle by overfilling a room). Even at level 3 any 100 health crew will die of asphyxiation before you can do 2 teleport cycles.

The overall strategy is to teleport your boarders out, but with priority of saturating the enemy ship with boarders rather than teleporting your crew back. With Clonebay, your boarders are expendable, - but with one notable exception of "enemy ship engaging its FTL drive". In this case, if your boarders are still onboard, they will be lost.

Backup DNA Bank is highly recommended to prevent the cloning failures in case Clonebay gets damaged during the fight.

Automated ships can be taken down with boarders, although the battle will take time and will still lead to destruction of the enemy ship, as automated ships can't be captured intact - so conventional weapons are still recommended. In order to succeed, your boarder race should either be immune to vacuum (Lanius) or have a sufficient fighting capability (Mantis, Rockmen etc) to destroy at least one level of enemy system before suffocating. Do not teleport the crew out and leave them to fight and suffocate, then clone.

Dying onboard the automated ship still counts as normal death and does not interfere with the following cloning process. Your crew will regain full health upon cloning and experience gained during short fighting period will compensate hand-to-hand skill loss. Be sure to saturate the room capacity by sending exact number of boarders to fill (and not overfill or underfill) the target room.

*Was 75 before Advanced Edition. 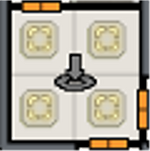