When arriving at a beacon, there will sometimes be an environmental hazard present, which usually impedes your ship in some fashion. Enemy ships will receive the exact same effects (with some exceptions, such as ASBs).

Beacon coordinates appear to be very close to a nearby sun.

Solar flares periodically light fires on your ship and any enemy ship, with a chance to also damage hull and systems in the affected rooms. The solar flare triggers randomly every 28--34 seconds, with a warning 5 seconds beforehand.

The effect is reduced when you have shields up, including a Zoltan Shield. Having additional layers of shield makes no difference.

The nebula here will make fleet pursuit slower but will disrupt your sensors.

Nebulas disable your Sensors. Slugs' telepathic abilities or Lifeform Scanner will allow you to see enemy crew regardless.

The speed with which the Rebels chase you is reduced while inside a nebula, by 50% in most sectors and by 20% inside nebula sectors. Nebulas do not count as environmental hazards for the purpose of the Tactical Approach achievement.

This section of the nebula is experiencing an ion storm.

Some nebula beacons contain ion storms (also called plasma storms), which make your reactor run at half-efficiency (rounded up). Zoltan power is not affected, nor is power from the Backup Battery. You will need to use your remaining power efficiently.

Power will be removed automatically from systems as you arrive, potentially causing you to lose shields and take damage from an enemy drone. You can prevent this by leaving enough spare power in the reactor before you jump.

Enemy ships' reactors are also halved, which can make the battle easier. They can re-allocate power when systems are ionised or damaged, potentially doubling their shields or deploying a new weapon or drone mid-battle. If the current enemy power usage is favourable to you, consider attacking only rooms that do not use power (such as piloting).

When the Rebel fleet overtakes a nebula beacon, it will always have an ion storm, even if it didn't have one beforehand. The exception is the exit beacon: nebula exit beacons have no environmental hazards.

Asteroid field detected in this location.

Asteroids will periodically fly towards your ship. Unless dodged, they will either knock down a single shield layer or deal 1 point of hull and system damage to a random room on the ship. They have a small chance to cause a fire or a breach. They have the same effect on enemy ships.

The interval between each asteroid is random, but scales according to your ship's shield system level: asteroids will come more frequently if your shields are highly upgraded. This potentially makes ion-heavy enemy weapons extremely dangerous in an asteroid field, since the asteroid frequency will not decrease when your shields are down. Nevertheless, shield upgrades generally make your ship much safer in asteroid fields.

Defense drones can shoot down asteroids, but will often fail to hit them before the asteroid takes down a shield layer.

Your crew can gain skill in shields and evasion from asteroids. Skill can only be gained while you are in combat with an enemy ship, even though the asteroids keep coming after the battle.

A pulsar is flooding this area with dangerous electromagnetic forces.

You can encounter a pulsar only if you play with Advanced Edition content on.

If shields are powered, one of the two random systems ionized will always be shields. If shields are unpowered, they can still be ionised randomly as can any other system, but will only take 1 ion damage. Therefore it may be tactically useful to unpower your shields just before the pulse hits, reducing their downtime.

The Reverse Ion Field augment gives a 50% chance to prevent all ion damage from a pulse, or 100% if you have two of them. Stationing a Zoltan crew in a system room can partially protect it, but won't protect a subsystem.

Zoltan Shield completely absorbs the ion pulse, taking 3 or 4 ion damage and protecting all systems. A single layer of Zoltan Shield is enough to block a pulse, making the Shield Overcharger drone very effective. However, a Zoltan Shield will not protect a ship that lacks a shield system (the ion pulse will ignore the Zoltan Shield); this is likely a bug.

Planet-side anti-ship batteries are detected in this system. 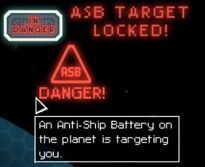 ASBs periodically fire a shield-piercing 3-damage shot at your ship, hitting a random room, and always causing a hull breach. These shots can be evaded but cannot be shot down. ASB shots bypass Zoltan Shields: the Zoltan shield takes no damage, but the ship will take hull and system damage.

Although many shots will be animated firing at you during this hazard, most are harmless and purely for cosmetic effect. You receive a warning 15--20 seconds after the battle starts, and the "real" ASB shot appears 5--10 seconds later. This cycle continues indefinitely until you escape.

If you are overtaken by the Rebel Fleet, an ASB will always be present, with two exceptions: they don't appear if you are at a nebula beacon, or at the exit beacon while playing on easy mode. Alas, if you are out of fuel at a nebula (exit) beacon, then ASB will be present and an Elite Fighter will start to charge its FTL Drive at the beginning of the fight.

ASBs are not considered an Environmental Hazard for the Stealth Cruiser achievement Tactical Approach.

Community content is available under CC-BY-SA unless otherwise noted.
Advertisement